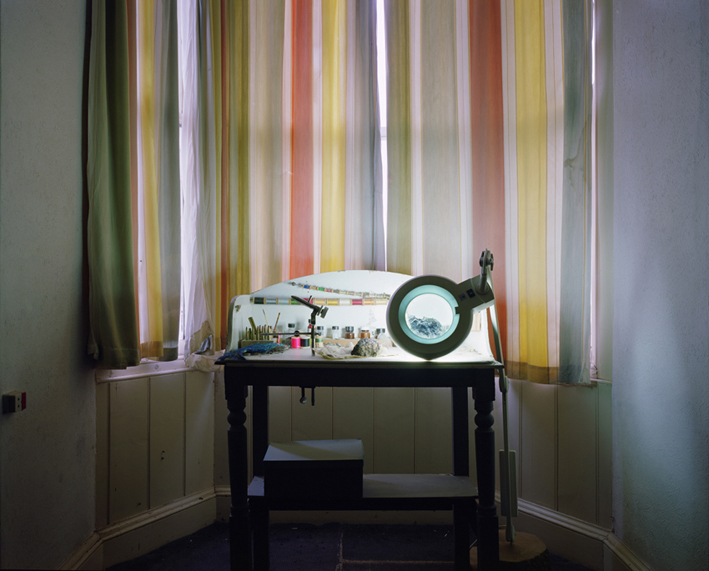 Through the Looking Glass is the new exhibition that opened very recently at Metronom, Modena, in which you participate with the new project Cheating the Moon. Can you give us some insights of it? What’s the idea at the base of it, and how has it been developed?

Annabel Elgar: My project Cheating the Moon takes as its starting point the story of the stolen and missing Goodwill Moon Rocks of the Apollo Missions which were gifted during the presidency of Richard Nixon to various countries of the world. Of the 270 moon rocks that were gifted, approximately 180 remain unaccounted for. This ongoing series of photographs presents a narrative of moon rock findings, taken from both factual and fictitious sources, where discerning one from the other becomes a complex proposition. As I researched the story, I discovered a rich and multi layered narrative, where bogus specimens were lauded as real ones and genuine moon rocks passed from one unscrupulous dealer to another.

A very interesting aspect of your projects lays in the process of research behind them; how the starting point is a precise documentation and evidence of real facts becomes the construction of a scene? Is it also a reference to the idea of photography as a proof of actual events?

AE: My work blurs the line between fact and fiction and it is this indiscernable quality that interests me. Cheating the Moon emerged as a narrative from a particular sequence of historical  events that in themselves presented fictitious accounts. It was then a case of how to transform this material artisitcally into a series of photographs that doubled up as a series of ‘mocumentary’ files which function as ‘factual’ fakes. As with most of what I do, this evolved in sync with the making of handmade props and details which figure within the various backdrops that I create.

I would love to know more about the process of making the works itself. You realize most of the materials that compose the scenes: is the union of different media, such as photography and sculpture, an essential prerequisite of your projects?

AE: The process of making work is a lengthy one, often starting with an empty space that gradually emerges as a stage through which to create the scene. A big part of this, as I mentioned previously,  is resolving what details and/or props will inhabit the space, how will  I make them or get hold of them and how these various elements will configure to create the image I want. However planned and organised this might sound, it is often the case when I actually take the photograph itself that something I had not anticipated shapes my thinking about how to take it or becomes part of the final piece.

Annabel Elgar (London, 1971) lives and works in London. She has an MA in Photography from the Royal College of Art and her work has appeared in numerous international exhibitions and various publications. Her most significant recent shows include Contemporary Photography from North-West Europe at Fondazione Fotografia Modena, Italy and Theatres of the Real at the FotoMuseum of Antwerp, a retrospective at The Museum of New Art in Detroit (2008) and solo exhibitions at The Wapping Project Bankside Gallery in London (2010) and Interludio at METRONOM, Modena (2011). She has taken part in various solo and group shows including apexart, New York; Zephyr, Raum für Fotografie, Mannheim, The Wapping Project Bankside and the Wapping Project, London and the Belfast Photo Festival. She was one of eight nominees for the 2014-2015 Prix Elysée.