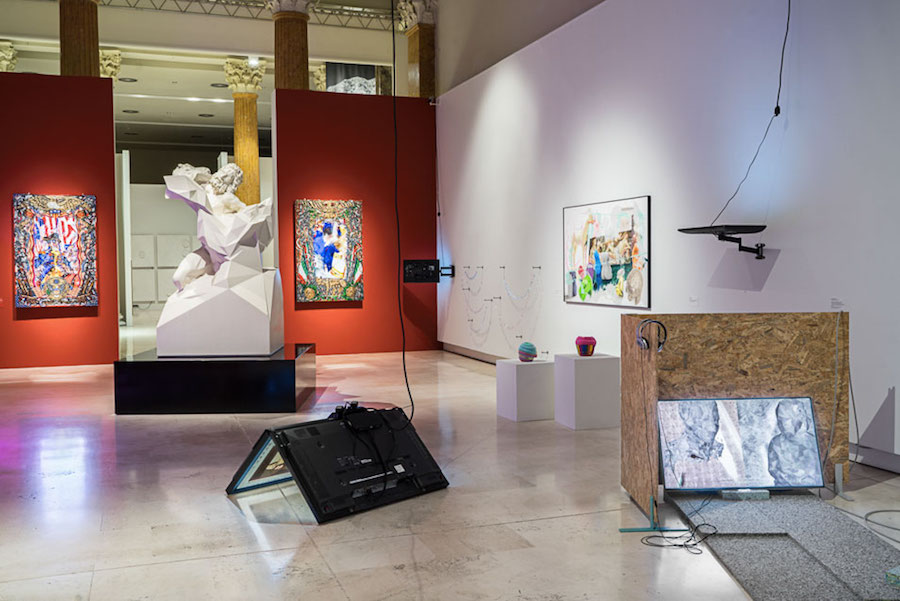 FC: Domenico, the 16th Quadriennale d’Arte of Rome ended just a few weeks ago. For the Quadriennale, you curated the section called Cyphoria. Can you tell us something about the exhibition? What is the main topic of the show, and how did you realise it?

DQ: The technological evolution that started in the aftermath of World War II has progressively spread its political, economical, social, and cultural consequences to the whole globalized world, in particular during the last 25 years. I prefer to use the word ‘evolution’ rather than ‘revolution’ for a specific reason: while a revolution happens in a specific moment in time, an evolution proceeds uninterrupted, and its succession of changes is the main factor that shaped the contemporary conditions. No aspect of life nowadays can be claimed to be left unchanged after its encounter with the flow of data from a computer – the universal medium – or the digital network and its mediation. With Cyphoria I aimed to inspect the way contemporaneity reflects on the work realised by a number of artists who have been working in different moments during this evolution. The exhibition gathered together names who explored this condition from its public point of view, analysing topics such as censorship, surveillance, the crisis of intellectual property, the new economies overwhelmed by internet, the ubiquitous production of the artworks; but there are also artists who presented a more intimate perspective and who inspected the personal consequences of hyperconnection, accelerationism, information inundation, and the new balance between private and public of being constantly online.

The exhibition was set in a hall that was also an architectural barrier-free passageway. Considering this aspect and the project itself, including 14 artists, I intentionally abandoned the rules of the white cube display towards a cumulative, fragmented, and almost messy set-up for the show. This had also the purpose of mirroring the kind of disorganized flow of information we experience on a daily basis. I am very pleased of the final result.

What meaning had for you the opportunity of working on Cyphoria and, more in general, for the Quadriennale? Is there something that you would like to do differently, if you could go back to the beginning of the experience?

For its history and the way it involves the Ministry – something that is quite rare for contemporary art in Italy – the Quadriennale is a high-level institutional project. Being a part of that means also being exposed to an unusual level of attention from the public and the media. It’s quite uncanny for someone who operates in this field, and it also means working on a show that is the object of huge expectations, a great part of which will inevitably be disappointed afterwards. The awareness of all this led me to present a question never addressed before in the Italian art institutions – at least at this level – and to do so with a clearly educational approach. Some reviews, under the pretense of being up-to-date with the latest international tendencies, have hurriedly described it as another post-internet exhibition. I’d love to ask to these critics: how many post-internet shows have you seen in our country? And how many of these included only Italian artists? Our purpose here, at the Quadriennale, is specifically to present artists from Italy, and to inspect the country’s location within the global culture.

What would I change of the experience? Actually, almost nothing of what could be in my power. In general, I am very satisfied of what was created within the framework proposed by the Quadriennale, even though some issues didn’t always allow a positive reception of the event in its complexity. I believe that, from the beginning, too much emphasis was put on the curatorial projects and on the figures of the curators, at the artists’ disadvantage, whose work should actually, in my opinion, get all the attention. Also, the authors involved were too many, and the general topic of the event was sometimes perceived as pretextual. On the other hand, I find the selection process of the curators – through open call – an excellent idea that allowed many independent professionals to participate. For this reason, I hope the same procedure will be maintained also in the future; maybe a good idea would be also selecting the curators through their statement, rather than a defined project, to let them work together afterwards in order to create a homogeneous project. One exhibition, shared and collective, displaying no more than 40 works – the expression of a unique vision that simultaneously shows also all the curators’ diversities.

How do you usually carry on your research, when working on a curatorial project? Do you follow a specific methodology or do you change your approach depending on the show you are working on? How do you select the artists and the works to be included in the exhibition?

No, I don’t follow the same method for all the exhibitions. A show can be an essay, a novel, a poem, an aphorism; it can turn into an historical fresco, a still life, or an intimate scene; its starting point comes sometimes from an assignment. For instance, in 2009 LABoral Centro de Arte, in Gijon, asked me to curate an exhibition as the conclusion of their series of events dedicated to the relationship between art and videogames. The result was Playlist. Playing Games, Music, Art, which looked back to obsolete technology, such as circuit bending and 8-bit music. The assignment of the Quadriennale was, instead, to tell something about the Italian art of the last 15 years that was still untold. Other shows arise from the intent of addressing a topic, or challenge a specific research. In Holy Fire. Art of the Digital Age (iMAL, Bruxelles 2008), for instance, my aim was to take a position against the cliché of Media Art’s cultural marginality and opposition to the maket, by calling into question this definition. The travelling exhibition Collect the WWWorld (2011 – 2012) bet on the comeback of the archival work in the era of big data and information overload – and it was a right supposition, a few years after a whole biennale was dedicated to the topic. Other exhibitions aggregate almost spontaneously around an artwork, or a series of artworks, that seem to encourage me to find their similarities.

In your opinion, what’s the most important aspect that an independent curator should keep in mind when working on his/her own ides for an exhibition? And what would you suggest to the young students and art passionates who would like to take up this career?

It may sound banal, but I believe that a curator must never detract his/her attention from the artists’ work. Everyone, during his career, should identify a series of names that he intends to follow in time, supporting them during their professional growth: a list that can be expanded to include new, younger artists, but is not restricted only to them. I believe that the best rule for a curator is ‘Follow the artists’. Curatorship is a mix of analysis, research, building networks, and questioning the artworks. I admire those curators who, with their strong personalities and charisma, have the necessary intuitions to encourage the artists to take a road they just caught a glimpse of – but I am not one of them. I always take inspiration from defined artistic projects, even in the most rule-free shows, using them as a communal starting point to operate.

Domenico Quaranta is a contemporary art critic, curator, and professor. His work inspects the nowadays media of artistic production and distribution. He is the author of Media, New Media, Postmedia (Postmedia Books, 2010) and the art director of Link Center for the Arts of the Information Age. For more info: http://domenicoquaranta.com.

The interview was realised by Federica Cavazzuti, January 2017.