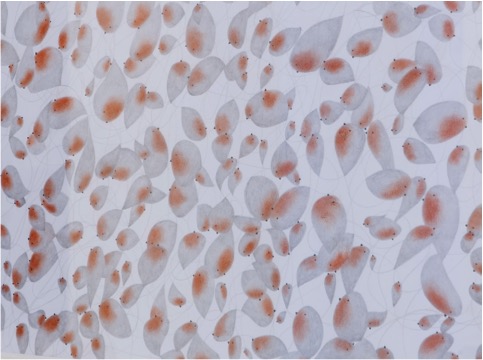 An artist, at the beginning of his career, is often a redbreast. Most of the time he can be noticed alone and still, focused in defining the limits of his space and research. His energy, steady and inflexible, sparks around him diverting the flow of particles in the air; its chest seems to crumble and disappear into scarlet and golden puffs. Singing out loud, the Redbreast Artist usually enacts a territorial practice, as its scrupulous observations report.

What would happen if all the examples of this typology were collected together in the same location? The artist carried out the first exercise of Riappacificazione forzata della specie (Forced Reconciliation of the Species) in which, by using a piece of paper, all the members of the species got in touch with each other on a shared space. Were young Redbreast Artists able to strike a balance within their persistent need of delimitation and defence? Were they able to lay the groundwork for a moderate and fruitful cultural environment, based both on mutual interaction and creation of a collective view of the future? I really hope so.