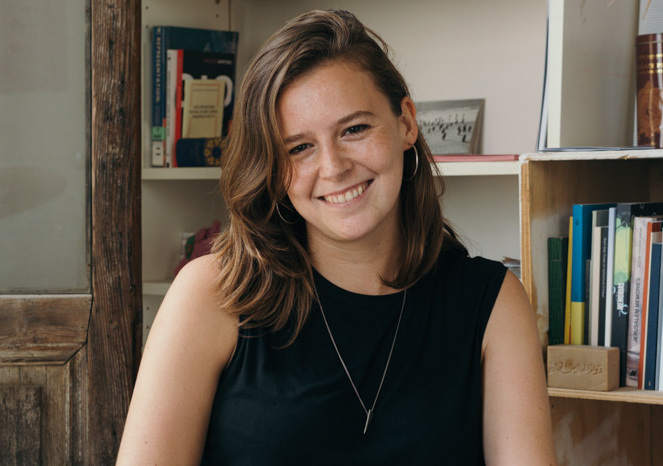 >Metronom: You are an independent curator and writer living and working between East (Beirut) and West (Londra, where you were born). With reference to the artistic and curatorial context, which are in your opinion the main differences and/or common ground that you experience in your practice, split between these two places?

>Rachel Dedman: The nature of the contemporary art world is that you can sit in a white cube gallery and be almost anywhere on the planet, but in key ways London and Beirut are pretty different places. The scale of the cities is vastly different, and their art scenes reflect that: Beirut’s is small, contained, and a little incestuous, which can make it both exhilarating and exhausting. London’s art landscape is so much larger, and more diffuse, that things feel more even-keel. Being split between places is actually quite a new development, as I’ve lived pretty permanently in Beirut since 2013, with stints of time in Palestine. Being back in London, I’m readjusting to how its sheer enormity makes spontaneity almost impossible.

Regardless of where I am, the approach I take to my practice doesn’t tend to change. Whether writing, curating or organising, my work is research-driven, invested in the political potential of art, and driven by conversation with artists, archives, or both. I was 23 when I moved to Lebanon, so my practice has certainly been shaped by local conditions and discourse. I’m generalising, of course, but in my experience, artists and curators in Beirut are much less afraid of being political, and of engaging with global issues and conditions, than in London.

>M: polycephaly.net is the platform you founded, together with artistLynn Kodeih. As stated, Polycephaly is “a platform and project exploring art’s (in)ability to ‘do’ politics […] examining how the political is de/activated through artistic and curatorial practice”. Could you tell us more about how you develop the program and which are the main issues/topics you are experiencing in pointing out this curatorial statement?

>RD: Polycephaly was born out of a certain frustration that Lynn and I felt when debating art’s relationship to politics, particularly in the context of Beirut. Watching the Syrian war unfold, knowing what is happening in Palestine, we found ourselves wanting our work to do something, whatever that means, in response to real-world urgencies. This was both a naïve and natural desire, I think, driven by latent guilt around art’s essential privilege and impotence. Basically, we’re interested in whether it’s possible for art/curating/writing to hold something to account, or have something ‘real’ at stake, when these practices are so often imbricated in, and complicit with the systems and conditions they rail against: the market, capital, inequality, conflict.

Polycephaly—meaning manyheadedness—became a commissioning platform for thinking about all this, more or less obliquely. Lynn and I invite inspiring people (mostly artists, writers, and curators) whom we know, or want to know, to begin a conversation with us. These conversations rarely unfold as we imagine, instead branching out in fascinating directions, opening up galaxies of related ideas. Only a proportion of these develop into commissions for the site; some remain discussions continued over coffee, parties, email. We work quite slowly, due to limited funds; we’ve been eking out a grant from the Arab Fund for Arts and Culture since 2015, in honorariums and domain name payments. Of the six commissions we have published, or are set to launch soon, one interesting echo I notice among them is that of representation and its politics. From Walid Sadek on witnessing and consumption in 15th and 16th century art and literature; to Daniele Genadry’s seeking the generation of a new image, new sight, in painting; to Octavian Esanu’s radically open exhibition platform—several grapple with the politics of visibility, and the continued agency of the artist.

>M: History reveals that arts and politics have a very long relationship: you conceived the Radio Earth Holdproject, commissioned by Qalandiya International and supported by Serpentine’s website, which use the supra-national connection offered by sound and radio frequencies to discover a new form of global solidarity. In your opinion, where could be find the most relevant art contexts for practicing/experiencing an action of social impact?

>RD: I honestly don’t know in which form or context art has most potential to inspire social impact. But I think collectives can be challenging, ambitious, productive things to be part of. Radio Earth Hold is a collective project that Arjuna Neuman, Laure de Selys and I developed out of our shared research into the potential of transnational solidarity. Our work on radio began with an interest in its earth-bound scale; for me that meant addressing radio as a colonial tool, specifically in British Mandate Palestine. I began exploring the ways radio was historically a tool of imperial power, which in Palestine laid the framework for Israeli control of telecommunications as part of an architecture of occupation. At the same time, across disparate political struggles, we explored ways in which radio has been a platform for resistance, and a medium that enables a political commons.

Beyond its significance as apparatus and infrastructure, radio as a natural phenomenon is older than the world, it is pre-human and pre-organic. Radio functions, like light, at a bigger than planetary scale: electromagnetic radiation waves are in constant vacillation—you can use them to hear a thunderclap on the other side of the world, or practice radio astronomy. The reach and frequencies of radio waves are contingent upon the contours of the earth’s landscape, and we are excited by the idea that radio cannot physically recognise geo-political borders, or even planetary boundaries. We’re interested in the latent political potential in this.

Beyond research, Radio Earth Hold has involved organising stuff: screenings, listening sessions, discussions with brilliant artists and interlocutors working on sound/power/activism/history, and the making and commissioning of broadcasts for radio. You can listen to a longer introduction to our research here, if of interest.

>M: You are pretty much interested in the history of clothing in Middle East and in particular the practice of embroidery: you curated Unravelled, held at Beirut Art Centre which featured a strong group of artists dealing with embroidery in contemporary artistic practice, as Alighiero Boetti and Mona Hatoum. Do you think there is a growing interest towards traditional forms of craftsmanship and their relationship with contemporary art?

>RD: My curatorial work in textiles began at the Palestinian Museum, in Birzeit, West Bank, where I was curator for five years, and developed three exhibitions and two publications on Palestinian embroidery and clothing.  At the Seams, 2016, and  Labour of Love, 2018, took gender, labour, class and commodity as key themes, examining how embroidery’s history shaped its politicisation after the Nakba of 1948 (when Israel declared independence, killing, persecuting and displacing hundreds of thousands of Palestinians from their homes). The exhibitions charted the role of embroidery and clothing in the visualisation of Palestinian nationalism—a process which I argue is fundamentally reliant upon particular ideals and images of the female body—and the expression of resistance during the First Intifada. By contrast, Unravelled, co-curated with Marie Muracciole,was an opportunity to move beyond Palestine, and explore how contemporary artists in the Middle East and elsewhere have engaged with and expanded the material and conceptual potential of textiles.

Among the art fairs and institutions I visit consistently, I’ve definitely noticed more textiles-based work in the last few years. There have always been artists working with the woven, the embroidered, the hand-made and mass-produced, but it seems like more of this work has been reaching the market and museums, commanding space in exhibitions, taking on wall power. Anni Albers had a major retrospective at Tate Modern. I doubt this is driven by greater interest in craftsmanship, though perhaps in some cases. I reckon it is more to do with shifts in cultural cachet. Ten years ago few people considered embroidery in contemporary art particularly contemporary. The labourious and handmade was humdrum, a little embarrassing, not sexy; today the discourse has shifted. Perhaps textile work feels refreshingly material and present after decades of the digital, its perceived ‘authenticity’ a beguiling, quiet counter to the shinethat characterised the 2000s. Maybe people are recognising how articulate textiles can be, how intimate the encounters they set up; I hope so.

Rachel Dedman is an independent curator and writer based between Beirut and London. Current and recent work include projects for Ashkal Alwan (for Home Works 8) and Sursock Museum, Beirut Art Fair, and Nadim Karam, all Lebanon; Kettle’s Yard, Cambridge; the Tricycle Theatre, London; and the Jerusalem Show IX. For five years, Rachel was curator at the Palestinian Museum, Ramallah, where she developed three exhibitions and authored two books on the politics of Palestinian embroidery, textiles and dress. Rachel is co-editor of polycephaly.net, and one third of Radio Earth Hold, a collective supported by the Serpentine, commissioning radio broadcasts from artists. Rachel studied history of art at St John’s College, Oxford, and was the Von Clemm Postgraduate Fellow at Harvard University, specialising in contemporary art from the Middle East. She is currently a Forum Fellow at Art Dubai.