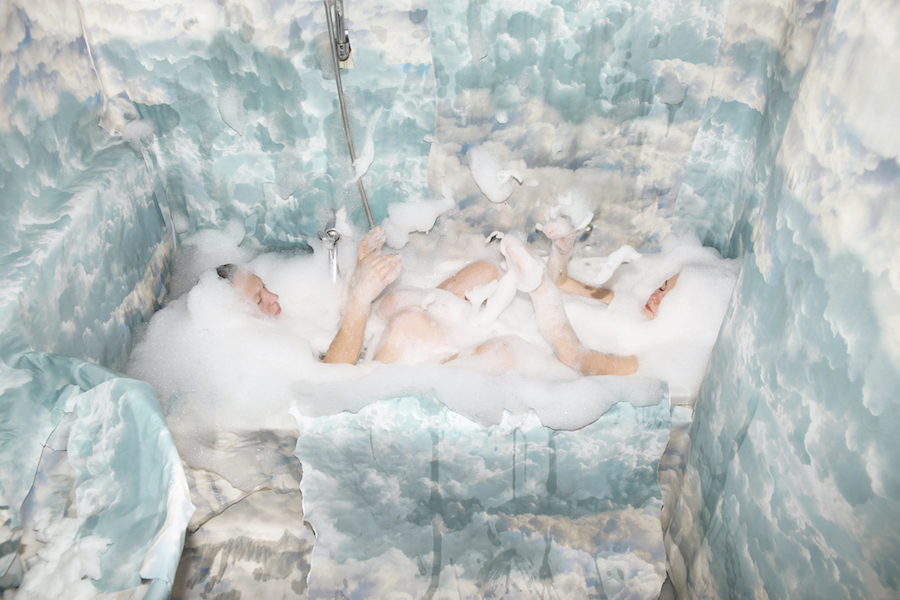 Metronom: Rachele, you recently took part in the second edition of LIVEstudio, art residency at Metronom, Modena, where you realised a part of the series One of Us, that is still in progress. What’s the starting point of the project and how is it developing?

RM: It all started two years ago, when I entered for the first time in the “Everybody calls it the girls’ house”. “Everybody calls it the girls’ house” is a new concept of living space, a territory composed by Balcanic elements, painting, first steps into adulthood and lost pasts – a hidden place, a tribe, and a stage. It is a place where everyone can experience a primordial and purer kind of human relations and feelings. I knew that the idea of giving a shape to all of this could easily become something risible, but, since I wanted my work to be free from this kind of fear, I started looking for a right way to approach the topic, a way that could avoid any sentimentalism. One of Us has its starting point in a series of scenes, set up within the house itself, where hundreds of confetti makes a room become the location of a twisted party, or where layers of foam create a sky within a 5-meters bathroom. Every set is a cabinet of wonders that continues exhisting for hours and days until the final picture is taken: it is an accurate and dynamic visual world where, through my camera, I want to show the girls and our mutual presence. Each scene is the result of a study on the material and its effects in front of the flash of the camera. The interactions between the girls, also, give a proper shape to these materials, forcing or keeping them in movement. This research has originated from the purpose to find a visual mechanism that could make the subject ‘plural’ and depict the interactions themselves. Every picture, then, oscillates between the staged photo and the family album, between the account of a private performance and an abstract painting, pushing the photographic medium to face its limits and contradictions, and the way the reality is concealed in order to be shown. Some of the pictures of the series have already been exhibited, others are still unseen. My idea would be to show the whole work only at a final stage, once the visual evolution of the whole project can be easily seen.

In your work, you make a wide use of portraits, often showing the fine line between the private, inner sphere of your subject and its outer, social aspect. What are the characteristics that interest you the most of the people you choose?

I often have the feeling that I do not actually look for the subjects of my works, but that they are the ones who find me. It’s as if I could recognize in them something that is already within myself – they move something in me and make me feel the need to show it. Every encouter bears in itself a peculiar shadow that, like a mirror, leads me to recognize a new aspect of the reality. The inner and the outer self of each individual are just two faces of the same coin: one cannot flip without the other side reclining as well.

What is the method you follow to realize your projects?  How do you develop your artistic research?

The most important thing is to cultivate the ground day by day. Reading a lot, from literature to every possible genre, or finding a hidden spot in a bar to look around: both are constant exercises that make me explore new worlds, use my imagination, and leave behind everyday judgments and habits. When this exercise works, it happens sometimes that I enter an alternative dimension in which fantasy elements naturally merge with reality, allowing me to perceive things beyond their merely physical presence. When I manage to reach this status, the artworks are generated automatically and in my mind I can clearly see the icon that I’ll try, later on, to shape. Once I clearly have in mind the image or the sensation I want to reach with my work, and I find the person or the situation that can help me to assemble it, it all follows very naturally: like in a dance, according to the rhythm you have to lead or to let youself be led.

Rachele Maistrello (Vittorio Veneto, 1986) majored at IUAV, Venice, ENSBA, Paris, and ZHDK, Zurich. In the last years she exhibited in group and solo shows in Italy and abroad, such as BYOB (Venice Biennale 2011), ZKM (Karlsruhe), IMMIX gallery (Paris), JARFO Foundation (Kyoto), Ca’ Rezzonico (Venice), og9 (Zurich), Museo MSUM (Lubiana). In 2012 she was selected for the public art project ARTAROUND. In 2013 she was one of the assignee of the ateliers at Fondazione Bevilacqua La Masa, Venice, and in 2014 she obtained the international award HANDLE WITH CARE, for which she realized the work THE HISTORY WITHIN for the city of Lubiana. In 2015 she was assigned the Combat Prize, photography section, and obtained the special mention at Fabbri Award for Contemporary Art.