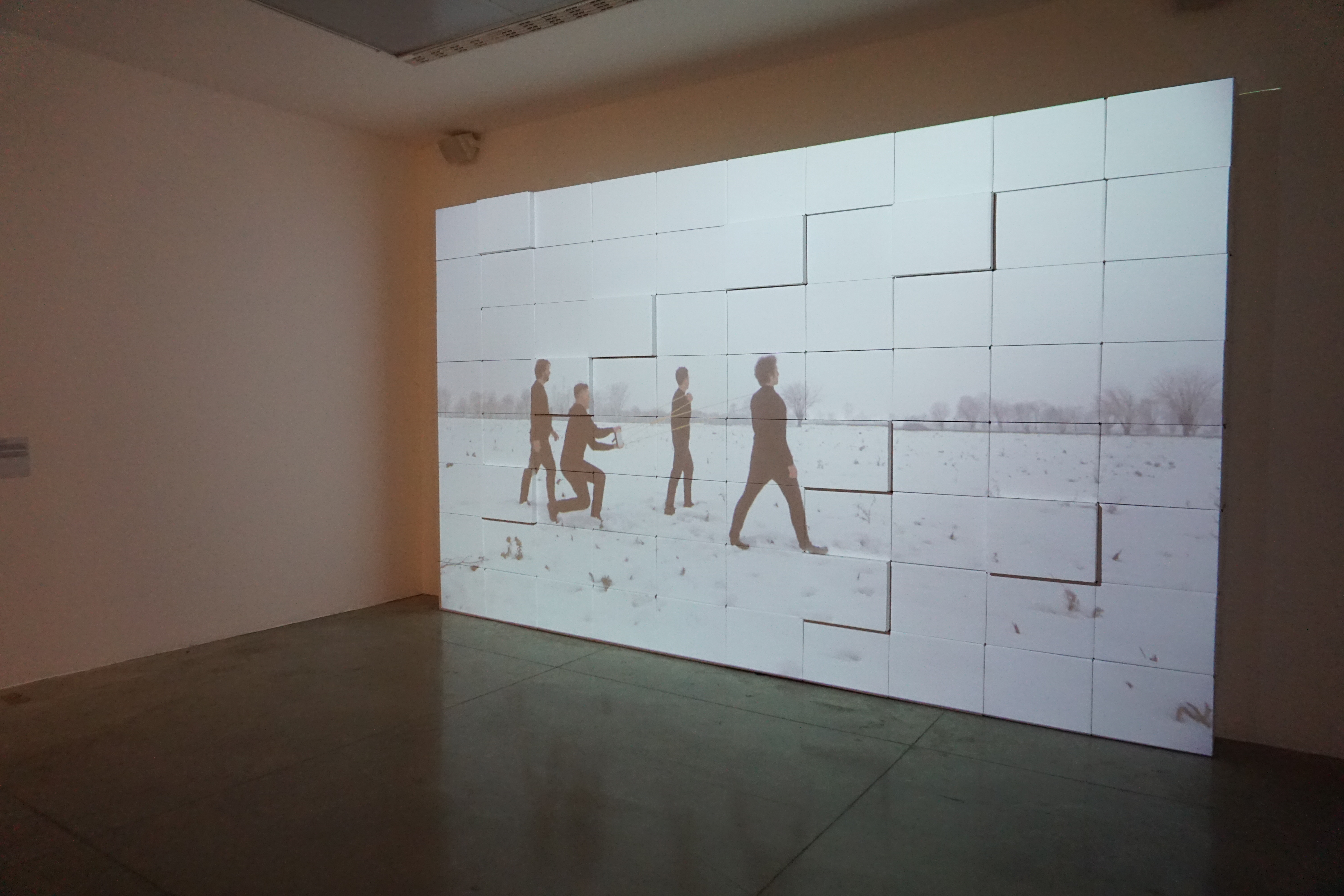 > “Launching a New Product”, your recent work now exhibited in Bologna, is part of your artistic research related to the theme of “Post-Fail”, namely the failure of the “digital dream”, of the unconditional trust of the man in the technological innovation. In what terms has this idea been developed and formalized in this new project? Has there been an evolution compared to previous works?

Our latest work, presented in Bologna, fits exactly in the main research that we have been carrying out for years, involving the narratives around the idea of innovation and the role of technology in shaping the present and future world. Launching a New Product focuses on the rhetoric of innovation and the production of ever-new technological objects that become real fetishes, to be desired and possessed. The video is an endless loop in which a product that is always new, but constantly very similar to itself, appears on the scene before being launched forward. In addition to the launch, the video is characterized by “unboxing” phases, in which the product is removed from its unopened packaging, the individual details are shown and the characteristics examined. Clean and neat hands touch and caress that product in a delicate and sensual, almost obsessive, way. In this sense we were interested in recalling some recent and very popular phenomena of YouTube. On one side the videos of unboxing of technological objects, in which the review of the product reaches the limits of fetishism for the object, not hiding the pleasure that can be felt in taking out a device from the packaging that contains it perfectly and from removing all the packaging elements. All that with a maniacal care in performing these actions with elegant and affected movements, also emphasizing sounds and noises generated during the operation. And here the reference is to the ASMR world, another phenomenon recently spread to YouTube. ASMR stands for “Autonomous sensory meridian response” and indicates a sensation of pleasure and mental relaxation caused by listening to particular sounds, whispered voices and noises produced by the rubbing of objects of various kinds.

> In your attempt to show the complexity of the relationship between man and technology, you have not concentrated on giving a value judgment: neither by expressing confidence in innovation nor by confessing fear for its dystopian and dehumanizing use, but analyzing the phenomenon in a more neutral way; Did this attitude guide you also in this case?

To summarize our point of view on this topic, which as we said is central to our research, some time ago we coined the term “Post Fail”. The term wants to highlight how our interest does not intend to promote neither an optimistic vision nor a pessimistic, what interests us is not to focus on speculations and predictions about the future, but to see how both the enthusiastic and catastrophic narratives fail at the same time which are formulated, leaving us in a present in which the relationship with technology is much more complex, multifaceted and often contradictory. We are interested in the failures, but not specifically the failures of technology, as the continuous failures of the narratives that are built around technological innovation to tell us about idyllic or apocalyptic perspectives, depending on the point of view. It seems to us that our present is made up of contradictions, complications and disillusions, where the absolute and resolutive points of view fail miserably at the very moment in which they are enunciated.

> “Launching a New Product” is a video whose title is really precise: the verb “to launch” does not indicate, as in the commercial jargon, the launch on the market of a new product, but the physical launch of an object that is flung with a rubber band. This linguistic overlap, based precisely on the double meaning of the verb to launch, generates an effect of ambiguity. In your research how important is the use of the language and irony that characterizes the alienating actions typical of your videos? that characterizes the unusual actions typical of your videos?

Rather than irony, I would say that IOCOSE has a certain interest in the absurd and paradoxical. The use of language and in particular the choice of titles often becomes for us a tool for triggering short circuits of meaning. In the case of Launching a New Product the title is clearly taken from the marketing world but is interpreted literally and the new product is thrown forward with a slingshot. This video is part of a series of works characterized by the re-proposal of a simple gesture of moving forward, with the intent to question the idea of innovation and progress that is normally thought as a linear path. Objects of any kind are moved forward, even the Earth itself as in the video Spinning the Planet (2014). IOCOSE’s final goal  is to move the world forward, one object at a time.

> Regarding your recent participation in the exhibition “That’s IT! Sull’ultima generazione di artisti in Italia e a un metro e ottanta dal confine”, curated by Lorenzo Balbi for MAMbo and entirely dedicated to young artists, how do you perceive the Italian artistic research of the last generation? How do you fit into it, considering that you live and work at a distance and in such different contexts?

The exhibition at MAMbo curated by Lorenzo Balbi is an operation that we find very interesting from many points of view. First of all because it is the first institutional exhibition in an important Italian museum dedicated to the artists of our generation. The exhibition is varied, multifaceted, even crowded, but probably for this reason representative of this generation. There are individual artists and groups, those who live in Italy, those who have only studied and are permanently abroad, those who are involved in painting, those who carry out conceptual research and those who deal with issues related to new technologies. In such a context we felt perfectly in line with all the others: we have always lived in four different cities in three different countries in Europe, we work remotely with all the advantages and complications that follow. We come from the world of the so-called “New media art” but we are interested in working with themes and forms that we believe belong to an art world that can actually be said to be contemporary.

IOCOSE are a collective of four artists born in 2006 whose artistic research investigates the after-failure moment of the teleological narratives of technological and cultural development, in regards to both their enthusiastic and pessimistic visions. IOCOSE believe that, in the long run, both utopian and dystopian narratives will disappoint, and much more mundane and varied realities will remain. IOCOSE’s focus is on the present moment in which the future is narrated, and on the ways in which these narratives are always already failing. IOCOSE have been exhibiting internationally at several art institutions and festivals, including: MAMbo (2018), Fotomuseum Winterthur (2017), The Photographers Gallery (2016), Biennale di Venezia (2011, 2013), Tate Modern (London, 2011), Science Gallery (Dublin, 2012) Jeu de Paume (Paris, 2011), FACT (Liverpool, 2012), MACRO (Rome, 2012), Transmediale (Berlin, 2013, 2015), Shift festival (Basel, 2010), The Influencers (Barcelona, 2010, 2013), TAJ and SKE gallery (Bangalore, 2014). Their work featured in publications such as Wired magazine, The Creators Project, Flash Art, Liberation, Der Spiegel, El Pais, Adbusters, Neural and Vanity Fair.