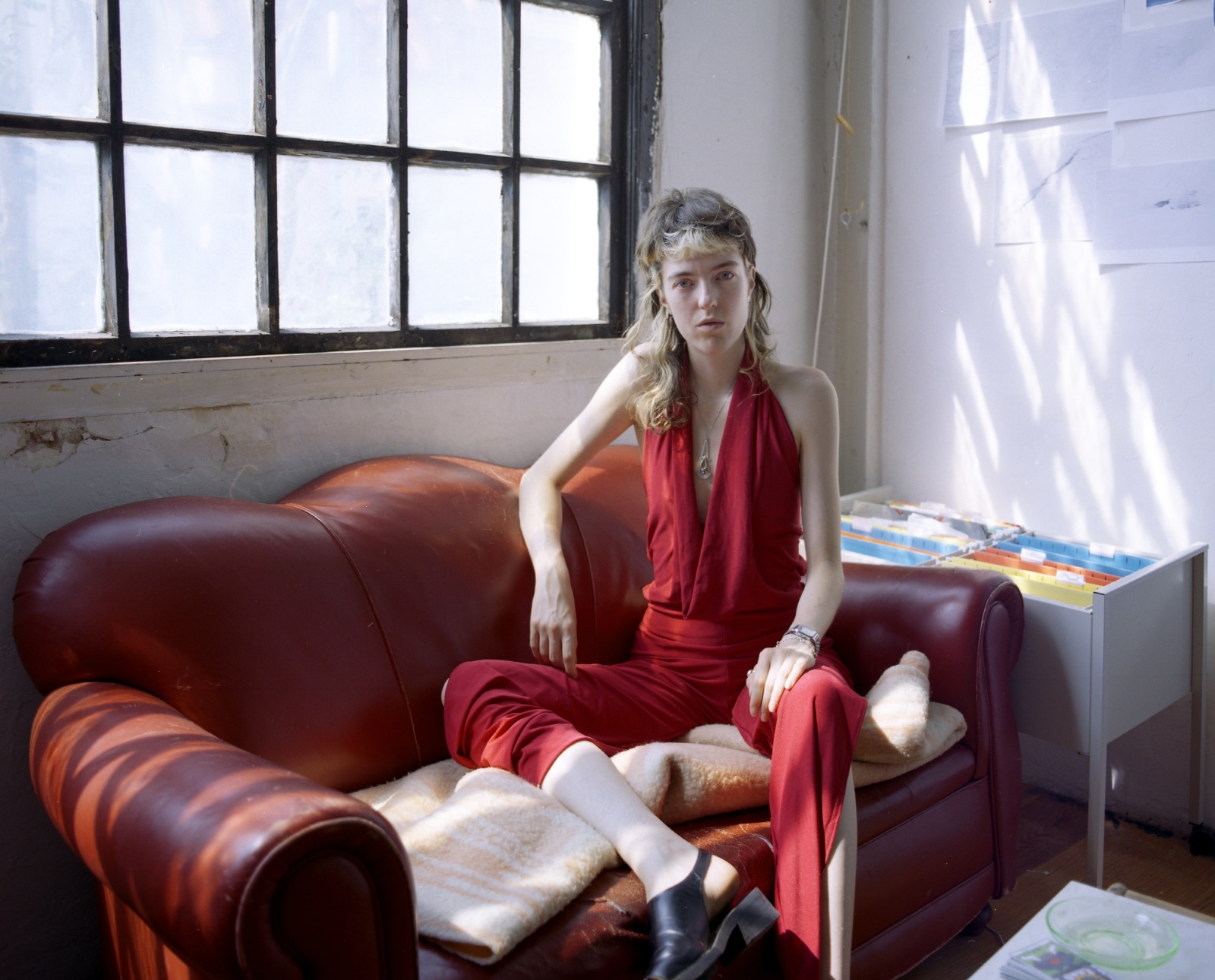 Pleun Gremmen: My work engages in narratives reflecting on socio-political tendencies expressed through internet subcultures and technology. Concerned by how the entity of the internet under influence of capitalism is shaping alternative realities by both amplifying and obscuring growing polarization, I create visual narratives as tools for visualization, conversation and confrontation.

M: Can you tell us about the process behind “Hysteria Narratives”, the video work screening on Metronom’s video wall until September 17th?

P: The first version of the work Hysteria Narratives was created partly in Frankfurt am Main during a residency in preparation for the Internationales Frauen*Theater-Festival 2020. Edith van den Elzen (filmmaker) and I were working on the curation and installation of the media container of the festival: Pandora’s Box. Just before leaving for Germany I had had a doctor’s appointment meant to figure out symptoms my uterus was showing. It left me with more questions than answers. After a few conversations where I complained that the lack of medical knowledge of bodies with wombs felt ancient and patriarchal (by far most research that is done on the uterus is in relation to pregnancy only), I decided to read old medical texts on the uterus and hysteria, which lead me to the tale of the Wandering Womb. I ended up rewriting one text to current English from a first-person perspective, which expressed my complaint that the medical field in this specific field doesn’t feel much progressed since these texts were written. A ton of my projects might be born out of a sense of urgency or frustration. This text became the base of the script of our video. I asked Edith to explore the topic visually within her filmmaking practice and combined my script and 3D animation with her film footage and editing. The work screening at Metronom’s video wall is a re-edited version, in which I focused more on the Wandering Womb part of the script and share more information about its history.

M: As an artist and designer, you create visual narratives through a variety of media, reflecting on social and political current questions. What is your relationship with archives, crucial sources of data and sparks for research?

P: I tend to mostly gather my own small datasets. This gives me the possibility of carefully choosing in which context they are represented and I can take responsibility for the data I am visualizing. Data is never neutral, nor objective, and can therefore have consequences that cause harm. I am trying to stay aware of those facts, although it is always a hard balance to find. Hysteria Narratives was sparked by finding a few key medical texts written in the 18th and 19th century, which I chose for their large Western European impact, which is the context I am showing the work in. Another larger project I created fairly recently, Alt-Reality Lexicon, was based on a collection of extreme right wing jargon, used on a few online platforms, which I scoured for a few months and hand-picked. That project was sparked by a single YouTube video, an Alt-Right appropriation of a song from the Little Mermaid, which had new lyrics with so many terms I had never heard before. The song was terrible, but I didn’t know the extent of how terrible because it was cloaked by the use of these neologisms. It was still catchy to the point of me catching myself singing it on my bike-rides to my masters. It was annoying enough to decide to create my graduation project around it.

M: “Hysteria Narratives”  was born in the context of Pandora’s Box at the Internationales Frauen * Theater-Festival 2020 in Frankfurt in collaboration with filmmaker Edith van den Elzen. Do you often turn to collaborative practices? What’s your standing on community-based research?

P: I turn towards collaborative practices more and more, mostly by creating with artists in neighboring fields of practice, lately that has mostly been photography, theater and VR. In my experience in working with different artists we can really strengthen each other’s work, make the work less stressful and spark ideas in each other that would otherwise not have been. That said, I’ve tried all kinds of visual media to create with and one of the reasons I enjoy 3D animation so much at the moment is because I can take on the roles of an entire film and post-production team alone. I can choose to work with a team, but I can also choose to be very independent.

Practically I have also been figuring out in which ways I want to participate in collaborative living with artists. During the showing of this work I was in residence at the theater ensemble antagon theaterAKTion in Frankfurt am Main, where I was living and working together with theatermakers for 1,5 month. After that I was visiting Porto with two artists/friends/colleagues/fellow queers, with the plan of finding a rental space to create our own Artist in Residency program, which has succeeded and I’ll be moving to in October. Last but not least in Rotterdam I am part of the artist community Time Window, which is a collaborative studio space of 50 artists, who are also organizing events and helping each by collectivizing as independent artists.

M: What is your relationship with social media? Are you interested in them as both creative opportunities and archive tools?

P: I am mostly interested in social media as a tool to gather information about general public opinion and zeitgeist. Which may sound super boring, but really a lot of my projects spark from something I saw somewhere and which slowly grows in my head. If social media wouldn’t do that for me anymore I would have probably left it, in the best case scenario. I don’t think it is super good for my, or anyones, mental health.

I think my relationship with social media is a pretty bleak one. My most dramatic self can point to social media as one of the biggest catalysts for a few big things that are negatively impacting us: resurgence of extreme right wing ideologies (including Trump winning the USA elections in 2016), rampant conspiracy theories, powerful monopoly corporations (Mark Zuckerberg) gathering way to much data on us…  don’t get me started. I think I need some relationship therapy…

M: We are curious about your education and if and how it informed your practice? Are there any professional experiences that left a particular mark on you and your art?

P:  A lot of little interactions, teachers and peers informed my practice. My formal art education started with my bachelors Graphic Design at ArtEZ in Arnhem, The Netherlands, which formed the groundwork of the methods I still use. Teachers who influenced me more than I knew back then are Femke Herregraven and Vinca Kruk (metahaven). I did my internship at Catalogtree where I had a great time at a moment when I was still convinced I was going to mainly be an information designer using data visualization and cartography. The way Joris Maltha, Daniel Gross and Nina Bender use typography, color, shape and coding to structure information has changed the way I look and what I see. The path to information designer changed in 2015 when I saw how data collection couldn’t win from post-truth narratives that were creating alternative realities, and especially around 2016 when those narratives influenced politics to a high degree I lost my faith in the collection of enormous amounts of data. I realized how powerful storytelling was, and wanted to learn how to produce counter-narratives. I entered my masters at the Piet Zwart Institute in Rotterdam in 2015 with the idea to pursue coding and datavisualization, but by early 2017 changed course enough to have started teaching myself the 3D animation software Blender. Within my graphic design practice  I had always felt a little stuck in still-image. Around and after 2016 I met a few theatermakers, Kolijn Jagersma, Djuna Couvee, who would influence the way I see and interact with an audience and how to work in a physical space. In the last two years my close friendship with photographer Eline Benjaminsen has taught me lots about both our critical art practices. There are many many more people, but the last one I want to mention here is Delphine Bedel, who was my teacher at the Piet Zwart, and who has kept pushing me and supporting me since.

M: What are your next projects and collaborations?

P: I have a bunch of collaborations and projects coming up in the next few months that I am very excitedly looking forward to

At the moment I am working with Djuna Couvee on our project Terramorphosa, which is our collaborative exploration into utopian ideas expressed in a group of digital islands. The first test-result will be shown at the Test Fest of Time Window Rotterdam on the 26th of September. In October I will be moving to Porto, Portugal for a year to build an artist community in residence with writer and poet Menahem D. Mendel and painter Hannah Schärmer. We will invite artists and researchers to join us for periods of time to cohabitate and share knowledge. The residency (working title: El Aleph) was created when we found ourselves in an unfulfilling pattern of life; chasing deadlines, participating and surviving in an all encompassing neoliberal capitalist environment and/or ready to bust through institutional walls. The residency will attempt to break free of these systems and methods of production by providing a temporary dedicated place of refuge. Through queering time, space, modes of production and living. We hope to hack our present. Later in the year I will start working on the visuals for a new theater performance called 696, bij theatermaker Luit Bakker. The results will be in theaters across The Netherlands in 2022.

Pleun Gremmen (NL, 1992) is an artist and graphic designer who creates narratives through a variety of media reflecting mainly on internet subculture and politics. Her toolbox consists of 3D rendering (video and «photographs»), virtual world building, graphic design (web and print), performance and installation.